One Fest To Rule Them All...

March 31, 2013
One week ago, a story came out in The Guardian that PEI's Liquor Control Commission was going to take more control of beer festivals on PEI. You can read the news article here, but, essentially, this is the gist (along with some other notes for the background story): 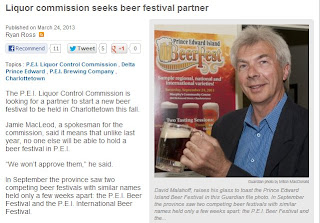 "...looking for a contractor to organize, manage and partner with the commission on a new beer festival.

Under the criteria for the proposal, the contractor will organize and supervise the festival, while the commission will provide promotional material and own the event’s website.

The commission will be able to renew the contract with the successful party on annual basis, provided there is a satisfactory performance evaluation.

Under the proposal, the contractor will have to maintain a minimum $5 million in commercial general liability insurance and a further $1 million automobile liability."

What're your thoughts? Could PEI not support two events in a year, just more spaced apart (Can't we all just get along?)? Should the gov't take control of such an event and limit its existence to once a year (in Sept. / Oct.)? Will this ensure a better yearly festival? Would brewers rather show up for a fest run by a promoter, another brewery, or a branch of the provincial gov't? Why can't I remember that other question I was going to post?