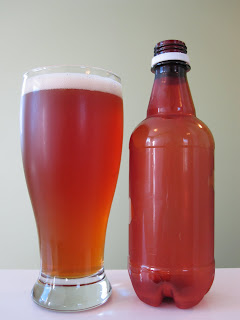 So... what's the verdict on this home brew?

It's got that slightly cloudy amber colour of my favourite IPA's from BC and California. It's bright, but a bit deep/brown, with just a bit of rose to it. When I opened it, it had a bit of a "chsh" from the carbonation. A good sign. When I poured it, there were lots of bubbles, but not too much head. The head is a bit nice in that it didn't all completely disappear right away. By the time I had a few sips, it was mostly all gone from the top, but it left a good amount circular, webby lacing.

The smell is spot on, too, for the style. The hops definitely give it more of a fruity than evergreen scent... it's easy to pick out grapefruit, orange peel... those nice citrus smells with that bitter slant. Maybe even a bit of nectarine... mango or papaya... cherry-pineapple?

My first brew (and only brew) before this was, to me, a total loss. It didn't carbonate right, and I didn't even like the taste of the red ale that was a malt-in-can kit. So, I didn't want to get too excited about this before I tasted it. You know what? This turned out to be a better than decent beer. In the flavour is the grapefruit, but the taste of the orange peel comes out on top. There is something somewhat stale about the citrus-y flavour... almost like the green of the plant, or that it's not quite ripe. Not enough to throw it completely off, but it's not quite as bright as I'd like it to be. It's what holds it back from being a really great facsimile of the style I love. The smell and the rest of the taste are enough to make a whole bottle / glass good though, so that's fortunate. 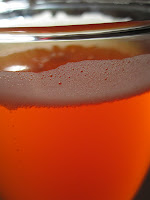 How's the mouthfeel? Pretty much as I would have expected! The carbonation may be a bit on the sharper side of things, but not overly so... it keeps it feeling fresh. The bitterness is definitely there, and it gives the throat an open / aerated feeling that I enjoy. It's not so bitter that it gets in the way of anything, though. Just about right. It's light, but not watery. It has just a bit of a viscous quality to it like I would expect from this style.

The verdict? A worthwhile effort. This aptly-named kit hits the traits of a West-coast IPA mostly all spot-on. It's turned out to be something that I won't mind drinking over time, and something that I won't be embarrassed to give to anyone that stops by the house! If you want to try it out, it's seasonal, and a quick-seller. PEI's Festa Brew retailer, Island Wine Experts, on University Avenue, may have a couple left, but the chances would be slim. Now... do I buy a set of 1L swingtops and try Festa Brew's Double Oatmeal Stout for the winter? Decisions, decisions...

PS - About 9-10 of the 44.75 bottles I got out of it didn't completely seal / didn't have the caps on tight. I could tell by looking at them after the two weeks, as I could see some bubbles at the top, inside the bottle. A squeeze test proved way more give than they should have. I poured one a couple of days ago, and it actually poured with the expected amount of carbonation. I tightened the tops... maybe they're salvageable...
Festa Brew India Pale Ale