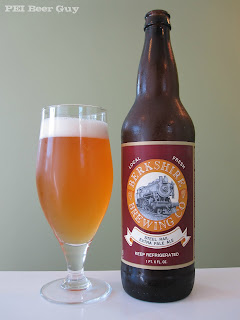 The beer has a gorgeous colour - a bright, slightly-foggy honey. A modest, nearly-pure white head lowers fairly quickly to just a smooth film. There's a fair amount of widely-spaced strands of bubbles as the beer lowers.

The overall aroma is pretty interesting - some fruit (flat citrus, perhaps), yeast, grain/straw, and even a bit of nuttiness. Really, it almost smells a bit like a multi-grain cereal with a few other notes along for the ride.

The flavour is more of the same, and I can't say that I have ever had a beer that tasted so much like grain or whole wheat before. I swear, it's like Life cereal... but, instead of putting milk on it, someone poured just a bit of a saison on it and added a few little pieces of dried coconut and fruit. The lasting impressions in the finish (exhale and flavour) are the nuttiness and multi-grain aspects.

The feel of the carbonation  is very light - just enough to keep things feeling fresh and bright. The body is medium (the lighter side thereof), and is nice and smooth. The finish is fairly clean - a little wet & a little sticky, if anything.

I was expecting more of a bright, hop-forward pale ale. What I got was more of a cross of a pale ale and a saison... with some extra rogue malt notes thrown in. More interesting than expected, and pretty tasty. Like Berskshire's Lost Sailor IPA, it even grows on you.
Berkshire Brewing Company pale ale