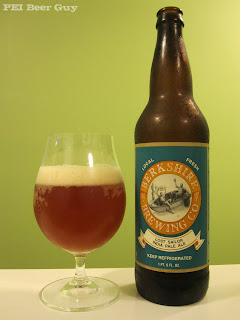 This, my first beer from Massachusetts' Berkshire Brewing Company, is more of a British-style IPA - meaning that it should have more of a malt presence and be a bit more well-balanced than the strong hop bombs I also love.

As expected, this IPA is a bit darker than other recent ones I have had. This is a somewhat-deep orange-brown, as you can see for yourself. The head is fairly creamy and cream-coloured, and leaves patches of lacing that look like Rorschach blots inspired by the shape of Florida (calling them spotty or webby just wouldn't be enough).

The smell is rather subtle - light dates, some grass, and just the shadow of orange & citrus. Some toffee as it warms. A bit of spice... almost like cinnamon. Almost.

I like love IPA's in general, but definitely gravitate towards the hoppier American variation. So, my first impression of the flavour of this is a bit "meh". It doesn't seem particularly flavourful in any way. Its main note, to me (even though it's pretty fresh) is a grassy one - what I always think of as "stale" in this style. Where the best notes appear in this beer are in the aftertaste... it's what keeps you drinking. You get just a hint of citrus & pith. What comes out more are things like an earthy woodiness, some sweetness akin to maple syrup, and the overall impression of a cream / amber ale. The more you have, the better it gets.

In terms of feel? At 40 IBU's, this is a pretty "gentle" IPA. It has a bit of acidic tang on the sides of the tongue that lingers for a bit. The finish is also sticky. The body is medium and creamy-smooth. The carb is so secondary (but balanced) that you don't even think of it.

Overall, I'm searching for or wanting my "ballsier" hops, but I know that's not what this beer is about. While I don't love the flavour or smell, there is something about the impression this beer leaves in its aftertaste and balance that leaves me thinking it's alright. I didn't love it, but it's a good beer one could have a few of in one sitting.