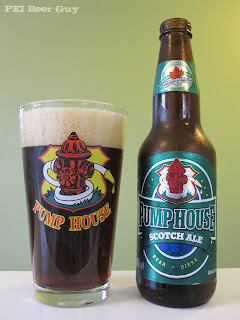 When I visited the Pump House Brewery back in April, one of the most memorable brews on tap that I sampled was their Scotch Ale. Now, it's time to sample the bottled version.

The ale pours a medium reddish brown, and is quite clear. A creamy and light brown head lowers to a still-creamy film of its former self within a couple of minutes, and leaves some stretched-out webby lacing on the glass.

In the aroma are roasted malt notes, molasses, & that "eau de bog" - peat. It's earthy and sweet.

The flavour is more of the same, albeit a little lighter in the malt categories and a little heavier in the peat area (especially in the initial exhales). There are also some fruity, acidic notes at the end of each sip and in the aftertaste.

The mouthfeel is smooth, but rather watery. Carbonation only surfaces as a light "microtingle" on the tongue. The overall impression is that it's a bit too light and flat.

Overall, the beer has some decent aspects (the exhale and aroma, mostly), but it's not particularly memorable or good. I remember the on-tap version being better. Unfortunately, it drinks like an ale that is 4.8% alcohol - I'd rather an ale like this to be a bit stronger and meatier.