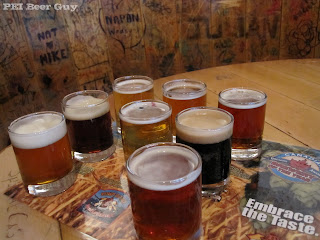 Recently, I made my first visit to the Pump House Brewery in Moncton. I had just begun the bad part of my March-Break-ruining cold, but I wasn't going to let some damn cold get into the way of me trying some ales and eats.
Food-wise, they have some good-looking stuff. I nearly went for one of the brick-oven pizzas, but I'm a sucker for pulled pork sandwiches (not G.I. Joe Pork Chop Sandwiches), and went with one of them. It was pretty darn awesome. The mayo was a little odd, but, luckily, there wasn't much of it. The fries were average.
As for beer, I just got a sampler. At first, I only got 8/9ths of their offerings, which you see here, as their IPA was getting switched. L-R, top to bottom, you have:
I bought my pint glass, was given a "Save the Ales" sticker, and was out the door. Next time: full-size tests!
Pump House Rye Pale Ale Scotch Ale