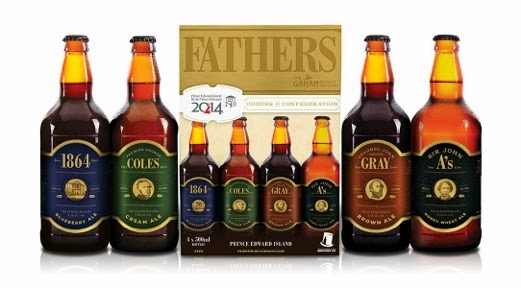 You know, things are OK in beer land for me - lots of good new brews for Christmas, with the promise of some more to arrive in the coming weeks... quality Aleanders meetings... I'm just still busy with work and whatnot to post as much as I normally do.

Let me preface this post by saying that I'm a pretty positive guy, I want to spread the good word, and I usually don't say much of anything negative if I can avoid it... so I'll try to be as nice and as brief about this one as I can.

The province of PEI is pulling out all the stops this year, to commemorate the 150th anniversary of the Charlottetown Conference, where the idea for this great nation supposedly was nurtured, or so we like to say around these parts. Man, what an opportunity for local brewers, especially the PEI Brewing Company, who has spread its reach across the country this year. They could create a new brew (or more than one)! Maybe an historical one. Maybe one only sold here, maybe one to send to other provinces to show what they can do as a brewery... but no.

What the PEIBC has done is released a money-grab of a four-pack: four beers that already exist, just repackaged, and, in two cases, just renamed. "1864" is the Blueberry Ale (how historic), "Sir John A's Honey Wheat Ale" is the same (natch), Iron Bridge has again been renamed, this time as "Colonel John Hamilton Gray", and, in a bewildering but understandable move, their arguably lowest-quality regularly-available beer, Coles Cream Ale has been bottled for the first time as "Premier George Coles".

Sure the labels look nice, sure, it suits the 2014 theme, but what a missed opportunity.

Here's some other ideas for a commemorative pack:


Thoughts? I'd be interested to see what other folks think could have been created, in jest, or in all seriousness.

PS - I'm still holding out hope that something cool could still be produced this year...
Aleanders PEI Brewing Co. The Gahan House