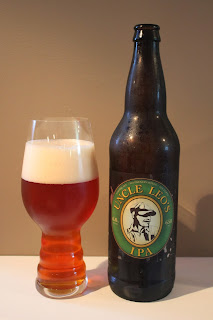 I've shared a bottle of this once, not long ago (thanks, Hogie), and now I have my very own bottle, straight from Pictou (thanks to Michelle & her dad!). The first time I had it, I found it came off more as a wet-hopped ale. Things were reminding more of grassy / spicy flavours, more than I like in an IPA. Still, it had pretty good aroma and flavour. Let's see how this one is.

Lots of pretty creamy head on this one which leaves lots of lacing on the way down. The brew itself is a quite-clear medium-orange.

The nose is a bit better than last time (could be due to something as simple as the glass). Aromas in the orange/tangerine family dominate, with a bit of toffee or caramel.

The flavour is about the same as last time. Although I'm almost sure it's only a dry-hopped ale, something about it gives the flavours a wet-hopped ale gives (that grassiness / herbal spice I mentioned). Also, there is something semi-dank & buttery in this semi-wet flavour / aroma that gives a hint of diacetyl that I'm pretty sure isn't really there (at least I hope not... could be something in the malt bill playing with my mind). At any rate, it tastes pretty good, but there's something about it that pushes it out of my preferred range.

Everything about the feel is pretty much fine... good carbonation, a smooth light-to-medium body, a fairly bitter finish (that, by the end of the bottle is much too grassy for me).

Overall... to each his own. There's nothing wrong with this beer, but it's lean towards the grassy / spicy side of things keeps me from wanting to return to this one. I'm sure it would suit lots of other folks just fine. Between the two beers, Leo's Red Ale is the one I'd willingly come back to (which I will, thanks to Michelle & her pa!).
India Pale Ale Uncle Leo's Brewery