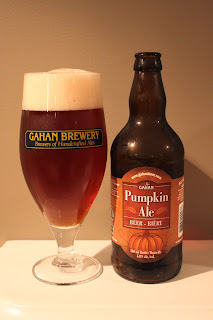 Due to so many people on Untappd posting pictures of seasonal pumpkin ales, I don't think I've ever been craving this autumnal release so much. It's the only pumpkin beer we can get commercially on the island! The Gahan House / PEI Brewing Co. has done a different pumpkin ale in each of the last two years (two years ago was good, last year's not so much), so I was curious to see how this year's turned out. I made sure to buy a couple on the day it was bottled - still bubbles in the bottles from the bottling process!

This brew pours a deep, reddish orange, with a tall head that's gone pretty fast (but has great lacing).

There are light aromas of spice (cinnamon... maybe clove, maybe nutmeg), and pumpkin.

In the brew are nice-enough flavours of the spices & pumpkin, too, but they are rather light. The flavour is fairly bright, almost on the citrus side of things... it kind of reminds of the their John A. Honey Wheat 's brightness. It's an almost lemony brightness that I can't decide on whether it helps or hinders the whole brew yet. I would like it to be a bit more smooth, with a slightly fuller body. I want a pumpkin ale to be slightly more warming / comforting, like a pumpkin pie. That being said, this brew goes down clean & easy with a bit of a lingering pumpkin pie aftertaste. It also has a bit of sweetness from brown sugar, but it's restrained, for sure. It has a light body and a clean finish.

This is a very easy drinker... the brightness balances the pumpkin & spice very well... it's got seasonal flavours, but they are subtle. I enjoyed my second bottle more than the first, and I bought two more bottles yesterday, so take that as an endorsement!