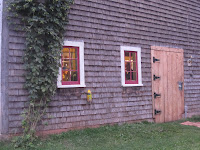 A week ago Thursday, the good folks at Barnone invited patrons to come out to see the hops before they were picked, as well as to taste a new version of their Pale Ale, one whose recipe was altered just in terms of hops (correct me if I'm wrong, Don). Now, I don't know if you've been able to tell from my posts in the past, or from following their progress over the last two years or so, but... Barnone's pretty coy and careful. I am 99% sure* that the difference is the addition of Galaxy hops - I'm not sure if anything else was pulled out or lessened, but Galaxy was the addition.

So... how is the new beer that 25% of the standing-room-only crowd in Rose Valley preferred in the challenge two Thursdays ago?

It's good. Better than the first one this summer, which was good, too, but... for me, this is noticeably better. It's crawling its way towards how excellent I remember their Pale Ale being at the first PEI Beer Fest two years ago.

It's an extremely-clear golden brew, with a great head, retention, & lacing.

The aroma is the biggest difference in this one. It has a tropical fruit & pith aroma... think orange, pineapple, and tangerine. I'd say there's a good amount of Cascade in there, too, but that's just a guess (by the way... I'm a rookie when it comes to hop crop inspections, but I checked out one of the cones on the ground outside in the hopyard, and there was lots of lupulin in it... smelled great!).

In the flavour, there is more pith & bitterness as well... a better hoppy bite. I'd like to see the malt side of things stick its neck out a bit more to balance things out, perhaps. It's bright, citrusy, & slightly cutting right now.

It has a clean, bitter finish, a light body, & the carb is a little prickly (but just fine, really).

A good beer. Still room for improvement, but good & getting better!

As a side note, I was surprised to see (and loved) how busy it was, for a place that is a bit in the middle of nowhere, and only sells beer. The crowd was a mixture of young & old, but the sight of a gent on the church pew next to me, growler in hand, who looked like a jolly overall-ed farmer in his 70's (or so) warmed the heart.

FYI, if you happen to venture out, pints are $5, growler fills are $15, and the growler deposit is $5. Taxes included, cash only for the moment. No word on how permanent this Pale Ale experiment will be.