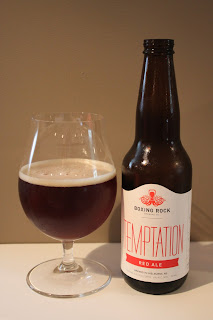 Ah! There's carbonation in this one, unlike the DIPA I just had from Boxing Rock. This brew's a deep, clear red (go figure).

The aromas on this one are actually pretty nice. A lot of malty caramely sweetness in there... reminds one of a barleywine's aroma much more than most red ales. There is a fruity, hoppy side to the aroma, playing second fiddle to the malt scents. I'm getting really ripe pineapple and perhaps some peach.

So far, this brewery has released three beers, and I've gotten to try all three thanks to a fellow beer pal (thanks, Hogie). Their trademark in their flavour seems to be some level of a dry grain / cereal flavour. I don't think there's anything wrong with that, but it may make one think that a beer's gone stale or isn't as fresh / refreshing. Thankfully, I think it's least noticeable in this beer. There are also some juicy fruit flavours

The body is medium, actually - I expected it to feel thinner. It has a rather smooth, full feel to it, but it goes down easy with a clean, fairly bitter finish. Great fruity / hoppy burps.

Overall, pretty nice. It's my favourite of the three. If the flavour were tweaked a bit, and the aromatic hops upped a bit, this would be really a very solid American-style red ale. As it stands, I like it way more than most "regular" red ales. I'd drink this again, for sure. At the end of my first one, I want another to keep the good flavours and aromas going.
American Red Ale Boxing Rock Brewing Co. red ale