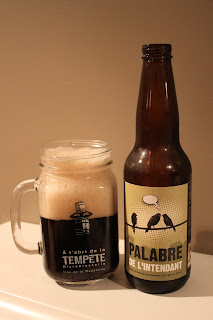 Ah... this beer is an interesting one. There is a movement in Quebec to create a beer style that is unique to the province. The style was initially called Annedd'ale, but is now more commonly called Anneda, I believe. You can find info on it here, but, it's essentially a style that uses annedda / balsam fir and a yeast strain obtained from within the first commercial brewery in Quebec.

For me, the translation is tricky... and correct me if I'm wrong... but "palabre" is "words" in the sense of having a conversation, and "intendant" is basically a royal civil servant, comme Jean Talon, a senior official of New France when it was first formed. So... roughly translated, words with a royal civil servant (like Jean talon), which makes a lot of sense, given the thoughts behind the style.

This brew is darker than I thought it would be - for whatever reason - and has tons of head that lingers for ages, leaving sticky lacing on the glass.

It has a very enticing and interesting smell... herbal / mint & evergreen with ginger bread, and some bright hop notes.

The aftertaste is a little soapy from its ginger side... maybe would be better if it was more on the gingerbread side than ginger. It has a very fresh herbal / evergreen aftertaste / feel, too... leaves your mouth feeling refreshed. Very interesting, unique flavour.

There's a bit of bitterness mixed in with that soapiness in the finish. It's pretty clean & slightly dry / airy, after some light stickiness. The body's light, but on the full side of light.

A memorable brew, a nice little beer experience, and one of my favourites from this brewery.
À l'abri de la Tempête Annedd'ale herbed / spiced beer