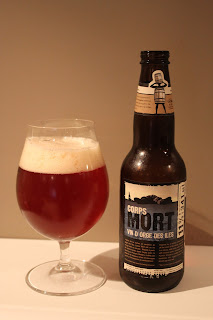 For my seventh & final beer from À l'abri de la Tempête, we have, perhaps, their crowning jewel. A salty barley wine called Corps Mort. Translation: dead body... good name for a barley wine, which is actually named after a local rock /island that looks like a dead body.

This is a bit paler than I thought it may be. It's a brilliant slightly-pale garnet colour with a couple of fingers of head that leave solid lacing. It's clear, with no carbonation in the glass.

It is not as sweet as most barley wines... the sweetness from the barley is there, with some salt. Something like... sundried tomato or dried peppers... different! There's something herbal in there... cumin? Strong, earthy, dried fruit, semi-floral. The finish on this beer is incredible - very salty with a slight smokiness as well (perhaps it's the smoked herring the bottle says it may contain traces of?). It smells and tastes like some sort of casserole or edible dish...

The body's medium, the carbonation is low, and the finish feels clean. Smoke and a mellow sweetness linger.

Totally amazing beer. So multifaceted, layered, and complex. It's like a powerful, easy, steady hand. Much like a dead body in some ways. Hmm.
À l'abri de la Tempête Barley Wine