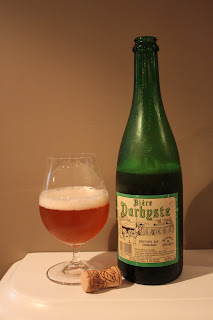 There's an interesting story to this one:

Darbyste is named after John Nelson Darby, preacher of temperance and father of Dispensationalism. His parishioners were said to be oddly moved by a ‘soft drink’ they insisted was just fig juice. A variant of the Belgian “Wit” or “Blanche” style, but a little drier and considerably more flavorful, Darbyste is a saison made with wheat and fermented with fig juice.

This brew is a crystal-clear tangerine colour, but there's lots of yeast in it, so it clouds up as you go. There is lots of fluffy white head to top it off. There's lots of fizz in the bottle once you pop the cork.

In the nose is some light fruit... grape and maybe fig, which could be just my mind forcing me to think it's there.

The taste... almost next to nothing! It's got more of a lemon slant and a bit of cracker / wheat than anything fig-like. There may be some light fig in there, but, if so, it's pretty subtle.

Feel-wise, it's a carbonation attack on the tongue! The body's light to medium.

Overall, this brew is OK... bright & refreshing, but overcarbed and a bit bland... it didn't live up to what I was hoping or expecting.
Belgian Pale Ale Brasserie de Blaugies Saison