On the right, we have the regular Beach Chair Lager, and, on the left, we have the same beer, less filtered. They're calling it a ''brewer's beer", or what the tap handle says, "Keller Bier". I'd be more prone - like one of the brewers suggested - to call it a zwickelbier, as a kellerbier (or cellar beer) is usually a little darker & more strongly hopped. So, with its "cellar" connection, and the fact it's the same beer, just less filtered, I will call it "Basement Chair".

The Beach Chair's pretty good today, actually. Bright, crisp, & the hops are coming through in their own wee way. Even a little acidic zip or brightness.

As for the Basement Chair - you know, I was expecting it to be pretty much identical, but it's not. It's got a smoother & slightly fuller mouthfeel, is less crisp & bright, and trades some of its brightness / zip for some really light fruit / banana character. I think Beach Chair's a slightly better beer, but at least this turned out to be less of an ill-conceived gimmick than I thought it would be.

Cheers to changing things up every now & then, even just a lil' bit! 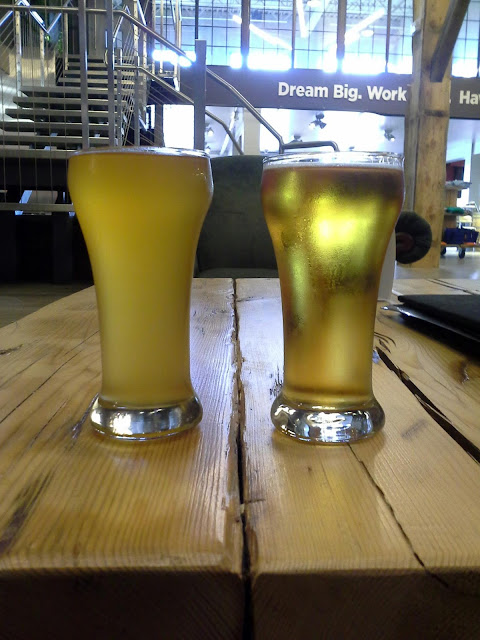