May 19, 2013
Yesterday was a landmark day in PEI's craft brewing history - it was the official grand opening of the PEI Brewing Company's new location at 96 Kensington Road, in Charlottetown. I was invited, back in April, to have a look at the new facility, and see how things were coming together. I got to add some hops to a brew, sample the first-ever brew from the new system, & have a chat or two along the way. When I left, I was quite keen & curious to see how it'd all come together. If you want to see what it looked like then, have a gander at my co-blogger Chris' post about his visit. He was much more into journalist mode than I was on my first trip.


I stopped by early on in the day yesterday, just to have a gander at the new main room, merch, and see what was available to sip on. I knew there was a blueberry beer coming, but I didn't know it was going to be bottled. I took a bottle & new glass home to have it in (more on that some other day soon). The bottles of Lobster Saison weren't quite ready yet, though, which is too bad. So, a pro and a con. In that vein, and to help me get my little post done, here are some other pros & cons of the day:

Pro - nobody was painted silver to match the brewhouse gear... not today, anyway, thank Ninkasi. What was whoever thought of that thinking? https://twitter.com/PEIBrew/status/335180330954801154
Con - I was hopeful that everything on tap would have been super fresh (but all  weren't)... like the Harvest Gold, or IPA, for example.
Pro - a "surprise beer" - the Mango Wheat! It was a test batch for the blueberry, but, to me, tasted even better.
Con - I don't know if I've ever had a good growler pour from the Gahan Pub or this place. First, there was about 1/4 to 1/5 of just head. Must have been missing about 10 - 12oz anyway. The pourer reassured me it was full, because the neck felt cold. I showed him where I could see the beer level, way below the fill level. Poor guy had no clue. Not his fault. Nobody showed him, I'd say. Someone gave him a hand, and at least filled it, rather flat as it now was. It'll be nice when the counter pressure filler comes back from its use downtown. Maybe that'll help.
Pro - first guy on stage played a couple Big Sugar songs back-to-back. Won over, I was.
Con - the "growing hops" by the waterfall aren't real.
Pro - lots of nice merch to be had
Con - some ridiculous touristy merch like top hats
Pro - the whole place... great concrete bar (although too many bubbles in the edges of it), nice mix of industrial and rural. Dig it.
Pro - just to finish on a double-positive note... the prices! Taxes in, a growler's $13 (not including the vessel itself, which is $5), a pint's $5.50, and a half-pint's $4.

Overall, I had a great early part of the afternoon chatting with staff, checking the place out, and soaking up the interest of the public in this new cornerstone of PEI's brewing scene. It warms the heart just a little when one thinks of what is yet to come for PEI's brewing scene. 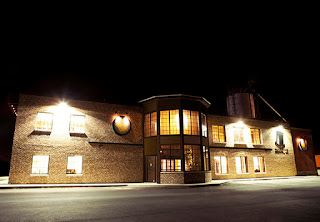 Some facts on the new place: