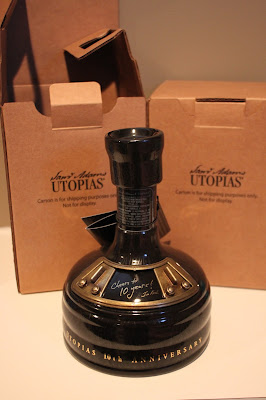 Under the "holy crap" file is this little number. PEI just got six of these in the last little while, and there are still four out there right now. Be forewarned: it ain't cheap. It'll set you back a cool $129.90, and, although there is a special Riedel glass that you can have sent to you, there are some hoops to go through to get it (had to contact Moosehead, who takes care of SA in Canada, and they have helped me out).

Some little tidbits on this that may solidify or scare you away from purchase:

So... if you just can't say no to something exclusive, have some big event in the near (or far, distant) future that you want to have this for, are too curious for your own good, have some extra coin, or some combination of all of these, have fun hunting one of these four down!