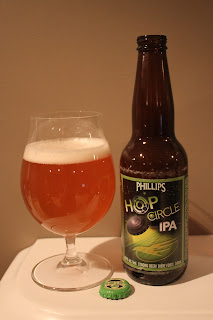 Big thanks to Red Hunt from Untappd who brought me some goodies this week, including this.

This brew's a golden shade of orange more gold/yellow than most IPA's I've had. There's not too much head, but there are sticky white patches of lacing all the way down.

The aroma on this was initially awesome. Lots of fruity hops. Then it changes in a few seconds. I don't what the Hell is going on anymore. It's almost nearly something smokey... but NEARLY skunky... but clearly not. It's... almost in the mint family... almost... lemon. What the fun times is going on... Sorachi Ace? A bit of Galaxy? I'm puzzled.

The taste is a bit of a let-down at first given the nose... more muted, for sure. The aftertaste is the winner here. It has this bitterness that borders on some kind of pithy mint feel - really clean, bright, and airy. This is a  really easy-drinker. That bitterness builds a bit, but tastes & feels light. Nice burps. Weird, I know, but... hey... I happen to enjoy the many hoppy returns I can get from a beer. Sometimes it can be the best part!

The body's pretty light, so's the carbonation, and the bitterness is in the mid-range or just above.