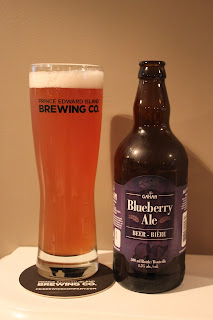 This one's got about a finger of head. It's a very cloudy, yellow brew with a reddish-blue hue from the berries.

It's got a wheaty smell with subtle blueberries... almost something leathery in there.

It's definitely got blueberries in the flavour, without being too strong or sweet. It's OK. It builds to borderline bubblegum flavours by the end - almost something artificial, but not quite. It's a good thing the brewer really held back by adding a significant amount less blueberry than suggested.

The feel's light, smooth, with the carbonation being on the lower end.

It's an OK brew. Lots of folks will enjoy it this summer, I'm sure. I probably won't have it again, though - mostly just personal preference.
Fruit Beer PEI Brewing Co. The Gahan House Wheat Ale