April 24, 2013
Today, I had a change in my day-to-day work, and had a meeting in Stratford. I had a splendiferously killer burger for lunch at Phinley's and, after the meeting was over, took it upon myself to kill about 40 minutes @ the Gahan House before I had to pick up some sushi (great food day, really). You know... I don't think I ever did the "tasting samples" or whatever they call it there (although I've had them all at some point) before, so I thought that's what I'd do instead of just having a resurrected Coles' Cream Ale or something I knew I'd like. So... to keep this short, here are my notes from Evernote: 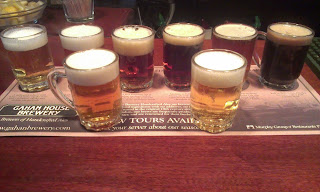