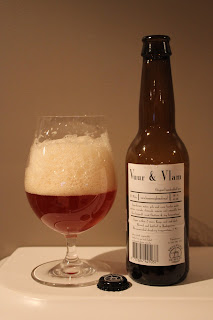 Translates as "Fire and Flames". Thank God it's not "Fire and Rain", because that'd make me think of that "Set Fire to the Rain" song by Adele which would remind me of that dress from the Grammys and how CBC R2 overplayed "Skyfall". Let's not go there. Move on.

This brew is a completely clear (until the sediment stirs up), bright copper colour. It starts bubbling up a head slowly as soon as you pop the cap, and the head in the glass upon pouring is sky-high, coarse, and turns slightly creamier and very sticky as it lowers fairly slowly.

There's some kind of fruit that is hard to pin at first... I'm pretty sure it's (surprisingly) figs popping up. It's definitely got an interesting aroma. It's got some hoppy and citrusy aspects for sure, at least at first, but I find it's more dominated by some kind of rather odd mix between figs, toffee, and some kind of bread pudding or some such thing. It's not won me over here...

There is a bitterness to it, but it's well under control - nothing offensive to anyone... not overly pithy or grassy. Hmm. It's like... like a mix of more than one beer. It's as if they took an IPA and mixed it with a greater proportion of a dubbel or something. I seem to prefer drinking it without inhaling... just take it in, swallow, and then breathe. It's more IPA-y that way, and the smell's throwing me off a bit, so this seems to improve it for me. Almost a barley wine sweetness in there.

The finish is a bit sticky and a bit airy, due to the bitterness. Microtingles from the carb, and a medium body.

Overall... just a little weird for me. Not a bad beer. Not a great beer. Just confused.
Brouwerij De Molen India Pale Ale