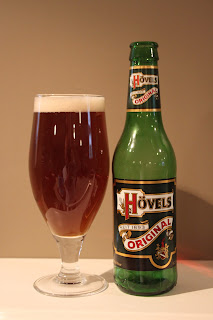 This brew has about a finger of head, is super clear, rose-ish in the pour, and reddish-brown in the glass. It's touted / classified as an altbier... really? Let's move on.

Instant green bottle smell. Why does anyone put beers (especially less-robust ones) in green bottles. Aroma-wise, this could be Heineken or anything else in a green bottle from Europe. In its defense, it does have a bit of toffee sweetness.

In the flavour is a bit of that toffee, but, really, it tastes like a mass-market Euro lager... no guts from the four malts in this one that give it its darker colour. It's a bit like an amber/red lager... some sweetness, but everything is else is grass, a bit of corn, a slight bitterness... followed by lager-y burps.

It's got a thin body, with a clean, dry, fairly bitter finish.

This is not a terrible or great (or that good, even) beer. It suffers from its green bottle packaging, and maybe age - one I got was basically at its best before limit