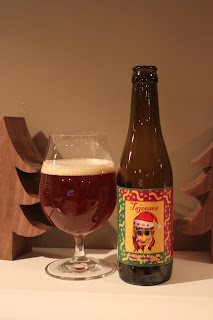 This one pours with a clear, deep orange-brown colour. Doesn't look too much like a blond ale as the label says. There's a low creamy head. The label on this is also changed for North America. Originally, the label has the face with some smoke coming out of the nostrils and some pretty bugged-out intoxicated eyes.

In the aroma - noble hops. Almost a fruitiness like raspberries or strawberries as it warms. The malty sweetness is there foremost, though - almost toffee-like.

Looks aside, it tastes like a blond, but maltier, if that makes sense. There is some caramel in there that almost borders on molasses... there's something sneakily dark about it. There's some spice (allspice?), a bit of berry, and those noble hops.

Feel-wise, it's on the light side of medium, with a slick finish. There's a bit of airiness to it from the alcohol and the bitterness. It has tingly carbonation, but not overly so.

As an aside, I like the story of how the beer got its name...


Strong blond winterbeer with fluffy white head which has been lagered for 8 months on different stonefruits. Tsjeeses was born out of a 5 year brew experience regarding x-mas beer without being capable of finding a suitable name up to now. With the name came a face, a caricature actually, that was drawn on the day Urbain, our brew master and master brewer, drank too many Tsjeeses’s. Every time he drinks one, he says "Tsjeeses, what a beer". Therefore the name is more an expression of stupefaction than a curse.