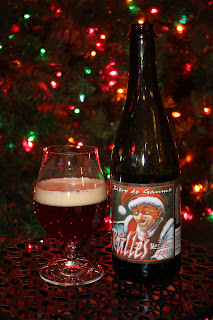 This brew has a couple of fingers of creamy white head with solid lacing that has a few irregular lumps. The beer's a mostly clear reddish-brown copper.

The aroma is subtle - a bit like a watered-down barley wine... sweet, with toffee notes and a subtle nuttiness.

The first time I had this a couple of weeks ago at our Christmas Aleanders extravaganza, it came off as watery / bland. Mind you, we had it near the end of our eve, and our palates were getting tired. On its own, it is more flavourful, but is perhaps a more subtle brew than you may expect. It has a light flavour of dark fruits, some toffee/caramel sweetness, a subtle roasted / coffee aspect, and some nuttiness.

It has a bit of a dry finish, a fairly light body, and a bit of a slick/thick feel.