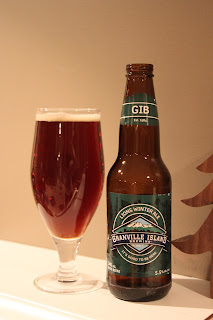 The first few times I had this beer, I had it right from the bottle. I imagined being darker than it was. It's actually a very clear chestnut/rosy brown, with a wee little white head on top that leaves some pretty solid lacing.

In the aroma are vanilla, chocolate, and hazelnuts.

Flavour-wise, at first, cream soda comes to mind. This one's rather big in the vanilla department. There's some light spicing in there, too, light roasted notes, and chocolate. It's also a bit nutty - it reminds me of Rogue's Hazelnut Brown Nectar in some ways.

For a warmer (a rather weak one, at that - 5.5%), this brew comes off a bit thin, with carbonation that might be a bit strong. That being said, though, I think, without that level of carbonation, this beer wouldn't be nearly as drinkable. It'd come off... well... flat. The finish is clean.

The first couple of times I tried this, I thought it was interesting, in that it was memorable - it didn't win me over, though. However, not too long into a sixer (which is available on PEI now), I started coming around. This isn't a bad little beer.
12 Beers of Christmas Granville Island Brewing Winter Beer