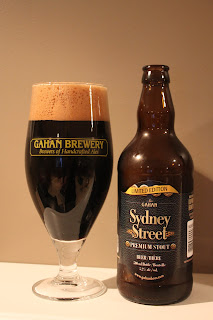 I like it. Gahan / PEI Brewing Company finally does a limited release / one-off of sorts. It's not too crazy of a  release, as this brew's been around at the pub for ages, but this is the first time they have bottled it. It had been a long time since I'd had this without being mixed or changed in some way, so my mind was fresh and unplagued by any prior opinions. I first had it a couple of weeks ago, and, when my wife called me from the liquor store yesterday (yes, she's that good), I asked her to pick me up another one. That should tell you something. On to my thoughts!

This thing has tons of brown head (you may need to wait for it to settle to get the whole bottle in, depending on how you pour), and the brew itself is a very dark brown. Inviting.

In the aroma is a lot of coffee, and only a bit of chocolate.

Flavour-wise, the coffee bean flavour is strongest here as well, with some more chocolate, and something that just borders on licorice / anise. There is also a note of molassess or dark, rye bread in there.

Slightly chalky in its feel, it is smooth overall. It's light enough to make it very drinkable, while maintaining the full body that a stout such as this should have. Its finish is somewhat dry and bitter.

I've got to hand it to Gahan/PEIBrewCo on this one. It's very nice and just about bang on in every area. It may even be their best bottled offering to date. Kudos, gents.
PEI Brewing Co. stout The Gahan House