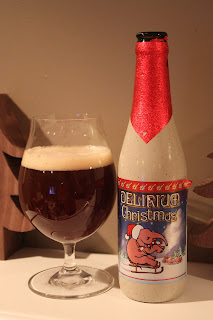 I've been wanting to do a series on Christmas beers for a while now. Unfortunately, last year, I didn't get my order of them quite in time. I got a few suitable ones, but not enough to do a "12 Beers of Christmas" series. For the record, the 12 days of Christmas don't actually start until Christmas. I didn't feel like posting Christmas beers in January, though, so I thought I'd do the 12 days leading up to it - a series of time-to-release posts to get you into the Christmas / winter brew spirit.

This shall be beer #1 - nothing says Christmas like a pink elephant on a sled.

This brew is a medium-dark orangey/ruby brown. It has a modest head that leaves a ring and a skim of suds. It's mostly clear, save for the clouding any sediment does.

It's got a nice aroma - fruitiness like raisin / date, fruitcake aromas, with some orange / citrus in there, too... maybe even a bit of coffee... also a hint of candi sugar / syrupy sweetness. My first first impression was that it was really nice, but not mind-blowing. The more it went on, though, it got really tasty. There's a nice finish to it... the start of each sip's strong, fades, then kicks in again. I don't know what it's like fresh, but this bottle with more than a year of age on it is great.

The carbonation is fairly high, but it's within acceptable limits. The body is rather thin, really... not bad, but, when you think about it, it feels lighter than its other traits would lead you to believe.

So... overall, quite good. Better than I thought it may be, and a great way to kick off some Christmas brews.