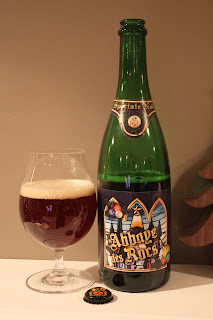 A "pfft!" with instant fizz in the bottle occurred as this one had its crown pried off. Oddly, all of the sediment that had settled nicely out started rising, falling, and churning about inside, in chunks large and small... like some kind of yeasty snow globe for a beeraholic. It has a clear, deep red-orange hue, with a modest head, and lots of carbonation in the glass.

In the nose is a bit of toffee, some sweet/dark fruits, and almost a bit of a sea salt / sea air vibe.

The flavour was roastier than I thought it'd be, especially in the finish. Kind of like coffee and nuts. The main part of each sip, though, says this is a bit lacklustre or past its prime, even though its best before date is next summer. With some warmth, it got a bit better, showing off some sugary sweetness and a bit of orange peel.

Perhaps overcarbonated, it also feels a bit thin - and airy from the bitterness / alcohol.

Overall, this is fair to OK, but underwhelming (if that's a word... actually, I know it's not 'cause I looked it up - it's one of those skills that I learned in my school). Also, by the end of the last glass, that glut of unavoidable fatty-looking yeast blobs detracts from the experience a bit.
12 Beers of Christmas Belgian Strong Dark Ale Brasserie de l'Abbaye des Rocs