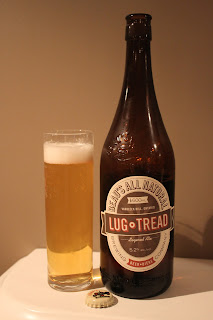 Finally... I get to try a beer from Beau's All Natural Brewing Company in Ontario. I have wanted to try one of their offerings for years, and, fittingly, I'm doing it with their flagship... er, flagtractor... beer. First off, I love shape and design of the 600 mL bottle as well as the artwork.

Lug Tread is a Kölsch, and an interesting beer in that it is an ale that goes through a lagering process - so, it should have some traits of both a lager and an ale.

It's a clear, golden, pale ale, with a minimal, pure-white head that stays around at least a little bit from all the active bubbles below. Some webby lacing appears.

It has a grassy hops smell, as well as aromas of grain (heavy on the grain, really - reminds me of a cattle barn, a bit), and just the faintest of citrus notes.

That citrus seems to cut come through, keeping things crisp, clear, and clean in the flavour. There is a bit of hop-generated fruitiness in the burps as well. It almost borders on some rice flavours, but, thankfully, it never crosses that border. The finish is clean, slightly dry and bitter, and has a long, light, but very present malty finish. It's also slightly woody - that grassiness borders on woody, at least, in aroma and in aftertaste. It suits the character of the brew, I think. It's got a light mouthfeel (on the high end there) with mild carbonation.

Overall, I liked this brew quite a bit. Even on this chilly night it's good, but I can imagine it's even better on a hot summer day, especially out there in the fields with those lug tread tracks.

PS - if anyone wants to send me this, feel free!
Beau's Kölsch