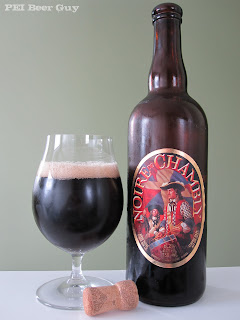 I think I had this one last summer, and when I did, it had been a while since I had it last. I left myself a note to comment on the faces of the people on the label and who they must have been modelled after. Looking at them now, I'd say Ravishing Rick Rude and some combination of Greg Kinnear and Chris Jericho. No wonder General Wolfe won. But I digress.

This one is a dark, dark brown - with some reddishness to it when pouring, and at the edges. The head is a finger or so, but doesn't retain/stay very well. There are very active bubbles in the glass which maintain a little bit of head.

The smell is reminiscent of a triple or even a saison/farmhouse, with a bit of a dark, roasted/porter quality. There is a dark blueberry / berry character, as well as a bit of smoke as it warms.

The taste and feel are not entirely how I remember them. It's
very much just like a Belgian triple - some banana from the yeast,
a bit of spice, some tang or tartness as, perhaps, a combination between the yeast and grain. Fruits like apples and pears also surface, with just the slightest hint of darker things like chocolate.

I has fairly high carbonation - it's a bit sharp if you hold it in the mouth. At first, it feels a bit sticky, but, overall, the finish is a bit tingly and dry. The body is on the light side of medium - which suits the taste, but not the look.

Overall, it's a pretty nice beer - a triple in stout's clothing. The next time I try it, I'd like to try it with some food - thinking smoked salmon or a BBQ'd steak. Some gouda or smoked cheese would be killer, too.