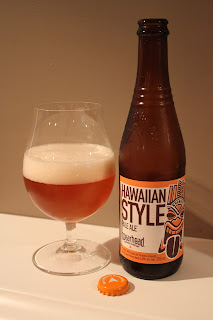 This one pours a pale orange colour, nearly the equivalent of that on the label - maybe a little more golden. There us a good deal of active carbonation in the glass, and the head is just off-white, creamy, and sticks around longer than some door-to-door religious types. Solid, streaky, ringy lacing.

The smell's great - what's in there... Galaxy hops? It's tropical. No, it's a mix of Cascade, Centennial, and Northern Brewer (I looked it up). I think it's the N.B.'s bitterness that mixed with the citrus etc. of the others that was making me think Galaxy. Pineapple, mango, maybe a bit of lychee, and maybe a bit of alcohol.

With the first few sips, the taste doesn't quite match the promise of the aroma. It's much more muted, coupled with a feel that sits on the border between bitter and alcohol burn (odd, at only 6%, but that's how this is coming off). After a few sips, it starts to come out of its shell a bit more - the feel stays the same, but its flavours strengthen a bit. Yep. This one ends up being just fine - quite nice indeed. Pretty well-rounded with bright fruit notes and enough a malt backbone to carry them.

This one feels much stronger than its 6% label would suggest. It's bitter and a bit slick / resinous (while drinking, and in the finish both), and the bitterness at play gives it that aforementioned feeling or suggestion of alcoholic heat. The carbonation's fairly gentle behind all that hoppiness.

Overall, I'd like to see this one leveled out a bit more. I don't mind the bitterness at all, but it seems to out-compete some of the other traits. Still, this is a really good beer. I'd pick it up as part of a regular rotation if I had the chance. I am savouring the burps at this very moment. Beer (hoppy, especially) must honestly be the most enjoyable food (and it is food) post-eating / drinking.
American Pale Ale Spearhead Brewing Company