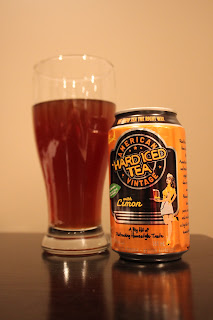 Every now and then, I get sent something that isn't beer but interests me enough to give it a whirl. When I received some info in this product, I thought... "Enhh... I'll read the promo stuff, though, anyway." When I did, I read that the tea was made from "tea leaves that have been cold steeped in a neutral malt base for three days... and dry hops at the end." My interest was won, and I decided to try it out. I couldn't find out what kind of hops were used - I was just told they were "standard bittering hops".

It pours a cloudy brown with hint of red, as you can see. There is no carbonation in the product.

In the smell is lemon, and a bit of wild roses (if you ask me).

I had three cans of this beverage. The first can tastes the best to me, and I found the last two to let the low alcohol content actually poke through. It's pretty balanced in its flavour, but I found it a bit on the sweet side and that it could use a touch more lemon. I'd like it to be a bit fresher and lighter - putting it on a bit of ice with a lemon wedge may have been just the thing.

The finish of it was dry and pretty clean. It had a smooth feel and was fairly light in body.

Overall, it's a pretty likeable beverage if this type of drink is your thing. If I ever saw it and had it again, I'd want to tweak it to my taste as mentioned above, though.