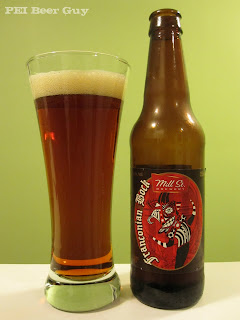 From the same sixer in November...

A very clear caramel brown, it has a creamy, yet short-lived head that lowers to a skim on top.

There is a bit of adjunct / corn smell. There are some roasted sweet smells in there, too... a bit like a marzen / oktoberfest brew.

There is definitely a sweet kick to it... it's mellowed out by some toffee or caramel notes, but the sweeter notes dominate... like candy... barley toy candy... maybe light maple syrup or corn syrup. The alcohol is pretty subtle, but noticeable. Maybe some chocolate. Raisins.

The finish is sweet, and the feel is medium with a minimally sticky finish. There is a bit of alcohol in the feel, especially on the sides of the tongue, it seems.

Overall, at first, I was thinking it was just OK, that I wasn't won over, and wouldn't bother with it again. Just too sweet, and not well-rounded enough. It grew on me, though. The aftertaste built, and so did the character / roundedness by the end. So... it's good enough to have a couple or few - just don't stop halfway through your first one. You won't like it.
Doppelbock Mill Street Brewery