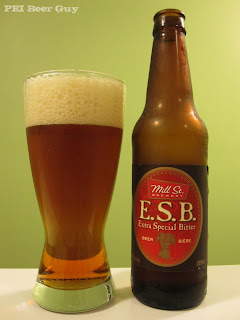 There was lots of head - reminded me of marshmallow fluff in look and motion, a bit. The beer was a bit paler than expected. Still, a nice, clear copper.

In the aroma was sponge toffee, and a slight metal/mineral quality.

The flavour came across as watered down... it had some malt sweetness / toffee, but was gone so fast.

The mouthfeel was light - watery, actually, with a wet, watery, watered-down finish. The carbonation was medium.

The taste was OK, and it went down easy... but it was SO watery. Blandblandbland in the finish, I thought. No character.
ESB Mill Street Brewery