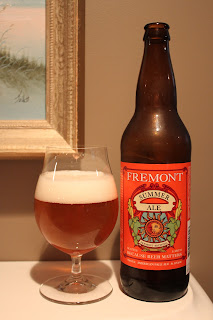 This is my first beer from Seattle's Fremont Brewing Co. They describe this beer as a "tangerine flower in a glass, endless days distilled into nectar of barley and hops. One grain (2-row), one hop (Amarillo). Simplicity….yet, so much more."

The beer pours a mostly clear peach colour. There is about two fingers' worth of head made up of small microbubbles that leave solid creamy lacing. There is active CO2 action in the glass.

The smell is quite nice. There is something slightly woody about it... almost like an earthy chipotle smokiness, but it's mostly all big fruity hop notes up front - pineapple, pear, some other tropical fruits, but not so much on the citrus side - what there is does lean on orange / tangerine, though.

The flavour is more of the same, and the beer has a super-smooth finish. There's no lingering feel at first, and the malt notes really kick in in the aftertaste. In that aftertaste is some mellow caramel sweetness followed by the faintest zip of fruit... even a little spice? I'm thinking of a hint of some lemon / lemongrass, perhaps, too... almost reminds me of some brews I had last summer with kaffir limes in them.