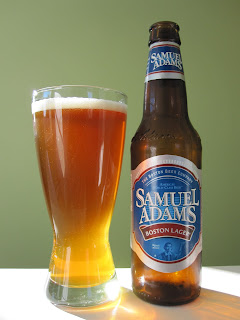 This beer pours a slightly hazy amber. About a finger's worth of head reduces to just a thin film within a couple of minutes.

The nose is a fairly nice balance of hops and malt; a "common" lager that has some interest to it. I get that standard "lager smell", with extra hints of green grapes / a light wine, and some malt that's harder to pin... at first, it's faint, so I find it tough to peg whether it's toffee, caramel, etc. As it warms, the malt intensifies, and it's caramel.

The taste is pretty good; on the better side of average. Slightly bready and sweet - mostly the malt notes malt, with a touch of hops.

The carbonation is good for a lager - crisp and plentiful, but not too aggressive; just there to keep it fresh and fairly sharp. The body is medium, and the finish is slightly sticky without being really watery or dry. A bitterness lingers a bit more strongly than I would like it to for this style.

Overall, a decent beer to pick up a pack of and take to a party; tasty enough, but not so good/expensive as to command your thoughts and attention. On tap, in "town", it varies. I've had it before when it was pretty nice; better and more hop forward, I thought. And I've also had it be more bland - quite possibly not the beer's fault.

This review has been brought to you by the semicolon.