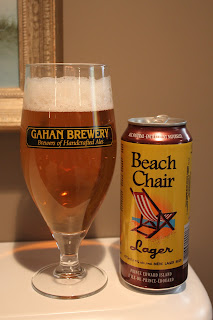 This last week, Beach Chair Lager-wise, has been a bit of a mess and an odd story with a twist or two. Let us not dwell on marketing oddities, though. I'm here for the beer - and now that it's out a few weeks early, let's review this recreational furniture-ready brew.

It is really pale in the pour, but dark enough in the glass. It has a decent head, but looks light - it reduces to a sliver of a white ring in not too long of a time. It is perfectly clear and has some light carbonation in the glass.

It has a bit of a rice smell to it, despite none being used. Light, dried-grassy hops. A slight spicy note (could be the grassy hops smell at play).

So... how's it taste? Not really bad, but not great. It's just kind of bland. Really, though, maybe that's the plan. I can't say the last time I sat at the beach and drank a fantastic beer. This is more of a "Holy Hell, it's hot, I need something wet," "What should we take on our fishing trip that won't break?" or "Let's go tan and drink at the same time" kind of beer. You're not going to be thinking critically when you drink it, like I am right now - it's just a beer that you'd have at the beach, a BBQ, whatever. Because it's not strong in flavour, it'd go with a lot of things. It's utilitarian... kind of like my wife's review: "It tastes like that last drink in the bottom of the bottle that's been sitting there all night and you gulp it down before you leave for the bar or something." All that being said, it's drinkable. Just not notable. Lots of folks (most, probably) will think it's fine, and that's great. I just wish it was great, too.

In the mouth, it's very light in body and carbonation, just slightly bitter and a little acidic / tangy.

Overall, I think you get my gist. I pull for every local brewer (PEI and Atlantic Canada) to succeed with every offering, but, of course, that's unrealistic. A good commercial lager's a hard thing to pull off - strong points are usually subtle, and any weaknesses are hard to mask. I hope the brewery does well with it, but I hope they improve it, too. My main fear is wondering who will pay (other than tourists) $3.25 for a single can of this when they can get something mass-market in a sixer or more for much cheaper per unit.