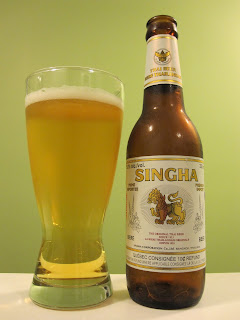 Here we have another beer that I reviewed over a year ago and never posted. It's yet another "I never had one from that country before" category. This brew is from Thailand.

It's a pale and clear lager. A hard pour gives some head as you can see, but almost completely vanishes within a couple of minutes.

It has just a bit of that "green bottle" smell when opened, but not as much when in the glass. Some wheat and honey are also in the aroma.

The taste, at first, is better than I thought it would be. The honey note was really up front at first. After the first third of the glass, though, I found the flavour went flat. It started to take on some slight metallic and corn traits. So, by the end, not so hot.

The finish was a little more bitter than expected. Maybe more than it should be for the style.

Overall, I found the beer to be just fair at best.
Lager Singha