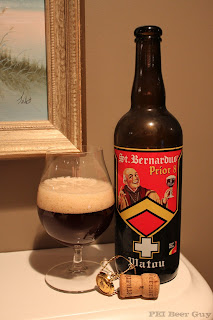 This is my second beer from the once-Trappist Brouwerij Sint Bernardus, or Saint Bernardus Brewery. This Prior 8, a dubbel (or double), is, like all SB beers, brewed using water pumped up from 150m - water which scientists apparently say was rainwater from the time of Joan of Arc. Scientists could also say that it was water which was mostly likely dinosaur pee at one time, too - like all water - but it doesn't make for good advertising. Still, I highly anticipate tasting this beer. Onward!

The beer pours a slightly-cloudy deep rose-amber. The head has a somewhat brown tint to it. It lowers to a smooth, thin layer and yields only spotty lacing.

In the aroma is slight alcohol, prune, fig, dark bread, apple/pear, and a bit of pepper & spiciness from the yeast.

The taste is of raisin, caramel, biscuit (not quite with nutmeg, but the combination of spice notes is close), candi sugar, some slight clove, and maybe even slighter licorice. The finish reminds me more of a Belgian dark ale... with that licorice-like yeasty spicy note at the end. Overall, the main flavour for me was the candi sugar - and too much of it.

The carbonation is spot-on at first - present and fairly bright, but subdued, although it increases in prickliness with warmth. The feel, overall, is smooth, and the body a robust medium. The finish it rather slick and sticky.

Overall? I wasn't really wowed by this one. It's good, it's enjoyable, it's solid. However, it was just too sweet, in my opinion, and didn't quite deliver to me the richness of depth and character that I thought it would.
double Saint Bernardus