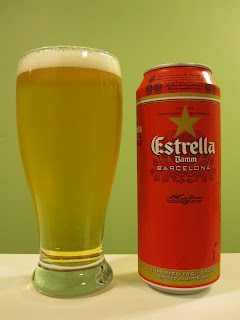 The head on this Euro pale lager is actually fairly creamy... about a finger tall, and it sticks around for a minute. Lots of rising bubbles, and lots of lacing, surprisingly, with an everlasting thin skim of head. The beer is golden and clear.

It smells like many other beers of this style, but has no skunky smell like some do. There's a bit of grass in there. There's something just slightly off about it, though... like it's 95% straw/hay, but 5% of it is silage or "country air".

The taste is poor compared to the look. At the tip of the tongue, it tastes just like blood at first... iron-y. Maybe this is the beer of choice for Spanish vampires... I dunno. I taste a bit of rice/corn, which is never a strong selling feature. There may be a bit of spice or lemon WAY in the background. It does get better as the glass / can wears on... it went decently with the old gouda I started eating with it.

The feel of it has a nice balance. Refreshing, not too bitter or dry, and not watery.

It's a drinkable beer, but nothing special. I wouldn't get it again.
Estrella Lager