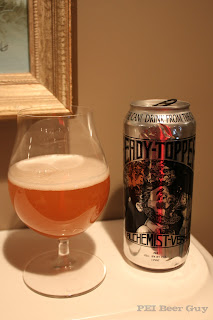 Right now, on BeerAdvocate, this beer is the #6 best-rated beer in the world. Oddly, on RateBeer, it's not in the top 50, even though it has scores of 100 in terms of a review average and style ranking. Either way... ohhh baby. In the words of Jake, it's time to hit it.

The colour is a bit pale, and surprisingly peachy (especially in the pour). It's a bit cloudy, and due to a really careful pour and a glass that I just rubbed a bunch of spots from, the head didn't rise to the occasion. I know it has much more to offer, I just didn't coax it out (I didn't pour it all out, either - had to save some in the can!).

The can says DRINK FROM THE CAN! (X3), and you know what - do it. It smells better IN THE CAN. I don't get it. I thought pouring some out (I had to do it, right?) would release more aromas, but no - it deadened them significantly. I can only assume they have a proprietary method of infusing can coatings with hop aromas. So... what's it smell like? Great. It's all citrus and a bit of flowers. There is pine, too, but really... this is a citral (new word for the day) hop bomb. It's grapefruit, orange, light mango... ripe pineapple. After a moment, sitting still, the glass had more aroma build up in it, closer to can levels, but... really... it didn't sit too long. Let's move on.

Flavour-wise, the can doesn't make a huge difference. It just blocks the nostrils a bit (dammit), which ends up being the same result as drinking it from a glass when the aroma's muted. It's fairly light and fruity in flavour - nothing over-the-top, overly bold, or malty. The bitterness is there, and I think I can pick out a bit of heat. Grapefruit, pineapple, and pith are what come out most. Maybe some light  toffee?

Feel-wise, it's got a body on the light side of medium. It's a little sticky without being overly so. It has a bitterness that definitely builds up in feel with time.

Overall, does it deserve the hype? For me, it's probably up there in the best IPA / DIPA's I have had, especially for its very-fruit-forward slant. The aroma's fantastic, the flavour's good, the feel is fine, and the burps are stellar. In the glass, it's really good - in the can, it's awesome. I could drink this every freakin' day.

Dear Vermont - please send me a four-pack or more of these plus a tourism brochure. Also, dear can-manufacturing people - please make a can with a nose hole. Sincerely, PEI Beer Guy.

PS - thanks for bringing it up, "wortly"!
Imperial IPA The Alchemist