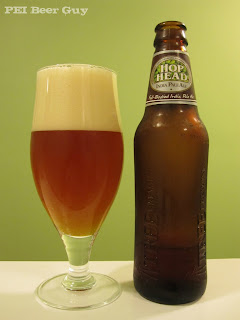 This is my first Tree beer, which I had and took notes on last summer.

In the pour, there's lots of cascading head action - three-fingers+ tall, with some density to it, and a bit of cream colour. The beer has a nice, deep-amber hue... which gets brownish in deeper/larger parts of glass. There is lots of thick, sticky lacing.

Its smells of malt/toffee and mostly hops are very intertwined... its hop profile comes off more as floral than citrus/pine to me.

The flavour is pretty nice... there is some citrus pith and flavours of mostly grapefruit and orange. It's maltier than some IPA's. It's "full bodied" claim is true. It's not like an English IPA, but there is more of a malt presence / balance than many West Coast IPA's. Overall, it could be a bit brighter in both aroma and flavour  (no freshness date to give me info on this).

The feel is fairly bitter, but not overpoweringly so at all - it's enough to make a slightly sticky finish almost feel dry, though. The body is medium, the carb is fairly low - but there enough to keep things feeling bright.

Overall, a pretty solid IPA. It wouldn't be my go-to one necessarily (even in just BC), but it's definitely worth a try.