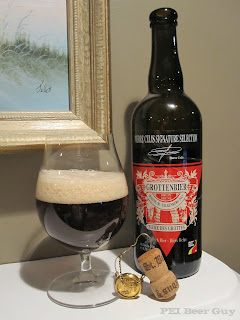 Literally, this beer is a cave-aged beer (in the marl pits in Kanne (Belgium) and Valkenburg (Netherlands), designed by the late Pierre Celis (who also brought back the style of white ales / witbiers with Hoegaarden). This beer was one of beerhemoth (I should trademark that) Michael Jackson's top ten present-day beers. It is also the first beer from this former Trappist brewery that I have been able to try.


It opens with a very loud pop, and is a crystal-clear medium brown with a rose tint to it. The decent multi-finger head lowers to a creamy skim by the time I get to drinking it. It leaves some lower, webby lacing.

Initially, it smells like a brown ale - somewhat unremarkable, really... at least at first. Then, there are light hints of a saison or even some tart notes. It becomes sweet, with some hay, mineral, & light funk, then warms up to throw in light fruit notes like raisins or even some bread pudding. It's a puzzler.

By the second taste, it's like a pumpkin ale - it has nutmeg/cinnamon/pumpkin spice, a mellow sweetness, a light/smooth caramel note... and some light nuts. I'm thinking this one has a bit of syrup in there. Perhaps maybe a bit of other spices and ginger. Almost a chalkiness in the finish near halway or so. This is a sneaky one that underwhelms at first, then creeps into your nostrils and taste buds. I'm really enjoying all the layers and turns. It's fairly light, yet robust.

The carbonation's gentle, and the finish is mostly slick with a bit of that aforementioned mineral / chalk slant. The body is rather light, but still substantial enough to be smooth and not watery.

The instructions on this said to serve at 6-10 degrees Celsius. I started out colder (hence the unremarkable start, probably), and I thought it was at its best when at the top of the temperature range or more. I looked forward to this brew a lot, and, after a "blah" start, it came through in spades. It was a great introduction for me to this brewery. The only downside? A very uncharacteristic headache the next day.