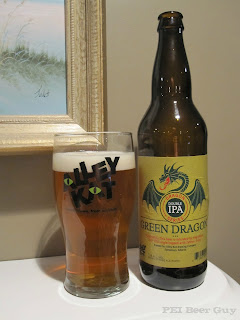 I have high hopes for this, my third Alley Kat brew, even though I had issues with every bottle of another of their offerings (my optimism stems from my own nature plus the other really enjoyable Ak brew I had).

The head on this is modest, creamy, and white. The lacing is solid, all the way down. The beer's clear, and rather pale for a double IPA, I thought. There are some slow bubbles rising in the glass.

This is brewed with one hop, Zythos, which is actually not one hop - it's a proprietary blend of other hops that are trying to emulate the best traits of a mix of other hops. Make sense?
Aroma-wise, I was expecting citrus, lemon, pine - the first whiff smelled more like Keith's - not good. I'm figuring this one is another bust. Once it was in the glass, though, it was more like light spice, maybe some Fuggles-like earthiness, and some light citrus. Much of what I enjoy from my beers is the aroma, and this one underwhelms.

Does this one have a lot of caramel malt, like their pale ale? It's caramel-y... but more drinkable than the FMPA's I had. Some pith comes out about 1/4 of the way in.
After the smelling, and with this, the hops come across most like Northern Brewer and Cascade to me. That's up for debate, though.

The feel or body of it is rather medium - very smooth and slick, with a finish that's just a little slick. It's not really resinous or anything like that. The carbonation's fairly strong at first but vanishes quickly.

Overall? Disappointing. I've got to stop sampling Alley Kat on PEI. Out of three varieties so far, two of them just aren't what online reviews crack them up to be. The Full Moon Pale Ale came across with just too much diacetyl (I tried several bottles from two batches). While this one is also bordering on that, it just isn't hoppy or fresh enough - it's coming across as something less aromatic, more pedestrian, and mass-market... that just can't be right. So... drink up, Albertans, I guess... but I'm getting wary of trying AK stuff that makes its way to me here. :(
Alley Kat Brewing Co. Imperial IPA