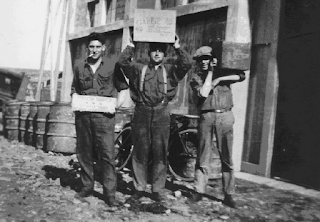 This Sunday, from 12:00 - 12:30, CBC's Land & Sea will debut a documentary on rum running, creatively named Rum Running. I know this site is mainly about beer, but I couldn't help but share this little media release I got. After all... after beer, rum is my next go-to for imbibing.

To learn a bit more about the documentary, visit its Facebook page. There, you can view a trailer as well as a few pics. Although it "explores the role of Atlantic Canada and the French Islands of St. Pierre and Miquelon in the infamous era of Prohibition," and how fishermen from Atlantic Canada shipped spirits to our "thirsty southern neighbours," I hope there is some mention of the Nellie J. Banks and her dirty sail in there somewhere...
Rum