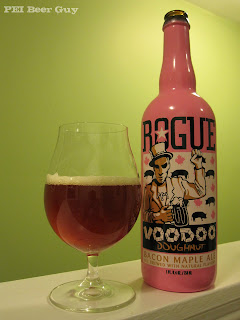 I was ecstatic to get this brew for Christmas. How could a beer fan read about something as crazy as a beer made to mimic a vanilla maple bacon doughnut and not want to try it? There was some drama that preceded this release, though. At first, it was to be a darker porter (which would have been better), but it ended up being a weaker and paler ale. You can read about the drama here.

According to my math (from the bottle's numbers), this ale is about a light 5.6% abv. It is a medium, slightly rosy amber. Some head in the pour doesn't last long.

Holy crap. Does this ever smell like bacon and maple. It's... it's breakfast! What it reminds me of most is the McDonald's hotcakes and sausage w/ syrup that I used to get, oh, 25+ years ago. The bacon is strong, but there's more smoke to it, though... it almost smells like half a smoke ale.

Flavour-wise, there's almost something slightly plastic about it from the large smoke profile. I mean, no wonder it smells and tastes a lot like a smoked ale... it does have three smoked malts in it (house-smoked Hickory, Weyermann Beechwood, Briess Cherywood). I'd say it's a case of too much of a good thing, though. Even by the near-end of a glass, it gets pretty smokey on the exhale... mostly smoke and bacon. The maple's not very strong, but it is there (I wish it was a little more forward). Although the aftertaste remains OK, it's just too smokey overall. As my wife said, it's "kind of like smokey meat".

Feel-wise, there's a light tingle and it's slightly dry up middle. The finish overall is slightly sticky.

Really, odd as it sounds for a beverage... overall - it could use more bacon and maple, and significantly less smoke. It was a cool attempt, I'm glad I had it and have the bottle, but it was just OK. It would have been so much better as a robust porter.
Rogue Brewery Smoke Ale