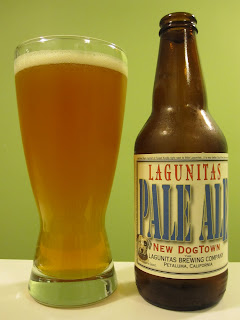 This is one of the Lagunitas brews I picked up on a trip to the Mainland a while back, and sampled over a year ago. For some reason, it got buried in the list of 70-ish unpublished brew reviews I have just sitting and waiting for their turn.

A small head drops quickly to a thin film. It's a little cloudy. It has a pale, yet bright, apricot colour. There's lots of solid lacing.

As an American pale ale, it has that grapefruit and orange peel smell; tropical fruit with a bit of a sweet, malty base.

Flavour-wise, it's not too far away from Hop Stoopid or their IPA. It's kind of like "Hop Stoopid Lite". It's refreshing, lighter, less bitter, but also a bit more plain. What is in the smell is essentially the same as the flavour.

The feel is refreshing overall, with a slightly dry and bitter finish.

Overall, this is a very good beer... more than I thought it would be. In some ways, it doesn't quite measure up to the strong traits of the aforementioned beers, but that also works in its favour. For some, it would be an easier drinker than something like their IPA or Hop Stoopid. It'd be a nice entry point for someone as they're expanding their beer horizons, to build up to more bitter and fruitier things.