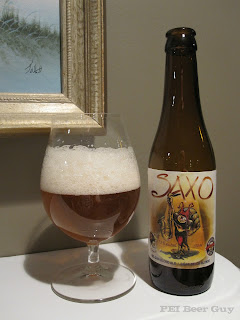 The head was misleading on this one. At first, I thought it was going to be pop-like - tall, fast-forming, but loud and coarse-looking. Surprisingly, it took a while to fall and left some creamier stuff on top once it did. Lacing came in small clusters that slid slowly down the sides of the glass. The beer itself is deeply golden and clear with lots of bubble action.

Smells like a tripel or a bit of a saison to me - lots of ripe, mushy apple, some hay, almost a bit of white wine, and some slight yeasty funk.

The flavour is very much more of the same - apple (maybe pear, too?), some grassiness / hay. Also present are white grape juice, a spot of lemon, and just a little spice.

There was lots of carbonation to the feel of this one, too. At first, it wasn't very strong, but it had a bit of a lingering effect. The body was rather medium with a pretty smooth finish. Nothing too sticky or dry.

Overall, I was pretty pleased. Not a wower, but a solid little brew nonetheless.
Belgian Strong Pale Ale Brasserie Caracole