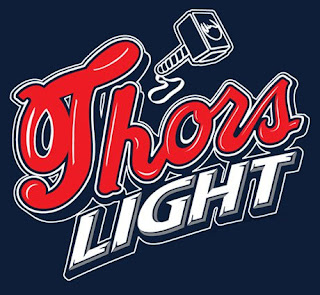 Growing up, I used to buy the odd comic (usually at Outlands, the Comic Hunter, or Shoppers). I liked the art, I liked some of the characters, I liked some of the humour. I was a casual fan, but haven't bought a comic in... geez... 20+ years, I bet. I was probably following the lead of my brother, for the most part, who bought and read comics like he was trying to achieve some kind of Guinness world record. Unlike me, he still buys comics. More than that, he's been working for Marvel for years now.

So, being a big beer fan with an amount of comic knowledge that's probably better than the average citizen, I was intrigued by the post and the challenge of making more. I always enjoy making a creative comparison...

Now, you can head over to Jay Brooks' blog and see his suggestions (along with the original site's ones). For now, have a look at some of my first thoughts. Feel free to suggest your own (I left the more mainstream characters alone for you. Ain't I thoughtful?).