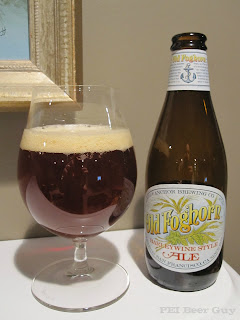 A couple of the first things I noticed on this barley wine-style ale were the bright, medium-orange colour, and the hoppy aroma - it's pretty bright and citrusy for a barley wine. It's also got a slightly ferrous or blood-like tinge to its aroma. Even with just the first sip, the character of the beer comes out - it's not a barley wine that's very in-your-face with that barley toy candy sweetness or a bit too much alcohol (this one clocks in at a somewhat modest 8.2%).

This is an ale that is a bit brighter, lighter, and fruitier than perhaps most. In each sip, you can pick up flavours like orange/tangerine, maybe even a hint of some things like pineapple or watermelon. After those evaporate, that's when the stronger side comes out - this is a brew with manners, it seems... almost like the beginning of something like a boxing match. A courteous greeting before a show of strength. The malt's sweet candy flavours and a bit of alcohol warmth and flavour finish off each sip... leaving your mouth feeling a bit sticky. Kind of like Pumbaa's grubs - slimy, yet satisfying.

This is an ale that I could see some say is a bit unbalanced. For a barley wine, though, I think it does a great job of showing some lighter traits along with its stronger ones. It's a very enjoyable brew, and I plan on getting one or two more to tuck away for a while.